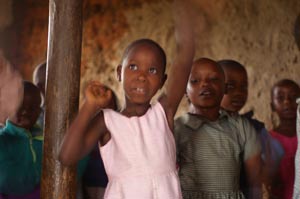 On February 4th the Kindergartens in Kanungu (Mama Barbara’s Kindergarten and Bushura Kindergarten) re-opened after the Christmas holidays. In Uganda the school year begins in January, and a total of 61 new children were admitted in both nurseries for Nursery Class 1. 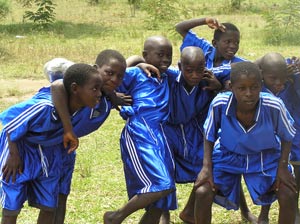 The students at Oslo Montessori Primary school have collected enough money to buy football jerseys for the school football team at the Katunguru Primary School. Now we hope to collect enough money in order for the girls to have jerseys for their net ball/ basket ball games as well. 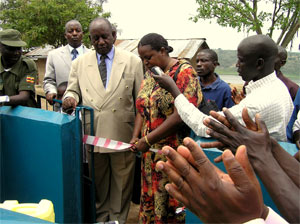 On February 6th, the Kazinga Drinking Water Project, in the village of Kazinga, Katunguru Sub-County, Bushenyi District, Uganda, was officially commissioned. Guest of honor was the Local Council 5 chair person Ishanga Longino Ndyanabo, and the Member of Parliament of the area was also present. The project was officially opened, however it was empathized that all stakeholders which have been involved in the implementation of the project have to continue to support the project to ensure it’s sustainability. So far, between December 15th and February 13th, the Kazinga Drinking Water Project was produced and sold 483’800 liters of safe drinking water to the community, equivalent to 21’035 jerry cans.