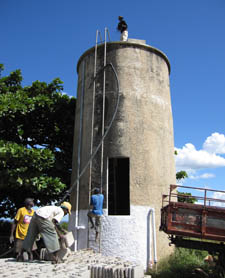 After the initial installation of two temporary taps in Quissanga in 2009, the work of making the structures permanent started in November 2009 until May 2010. Permanent collection points with a water meter and four taps were constructed in four locations. In addition, the colonial water tower was rehabilitated and filled with water by a new pump installed at the reservoirs. The water from the tower will be able to supply the upper taps, as well as the houses and institutions at the district headquarters. In order to protect the generator running the pump near the reservoirs, a small house was constructed. Fontes Foundation local staff supervised the work which was carried out by “AssociaÃ§Ã£o IrmÃ£os Unidos de Quissanga”, an association of local masons and bricklayers. This made it possible to ensure quality, and at the same time it created work and built important capacity in the community.