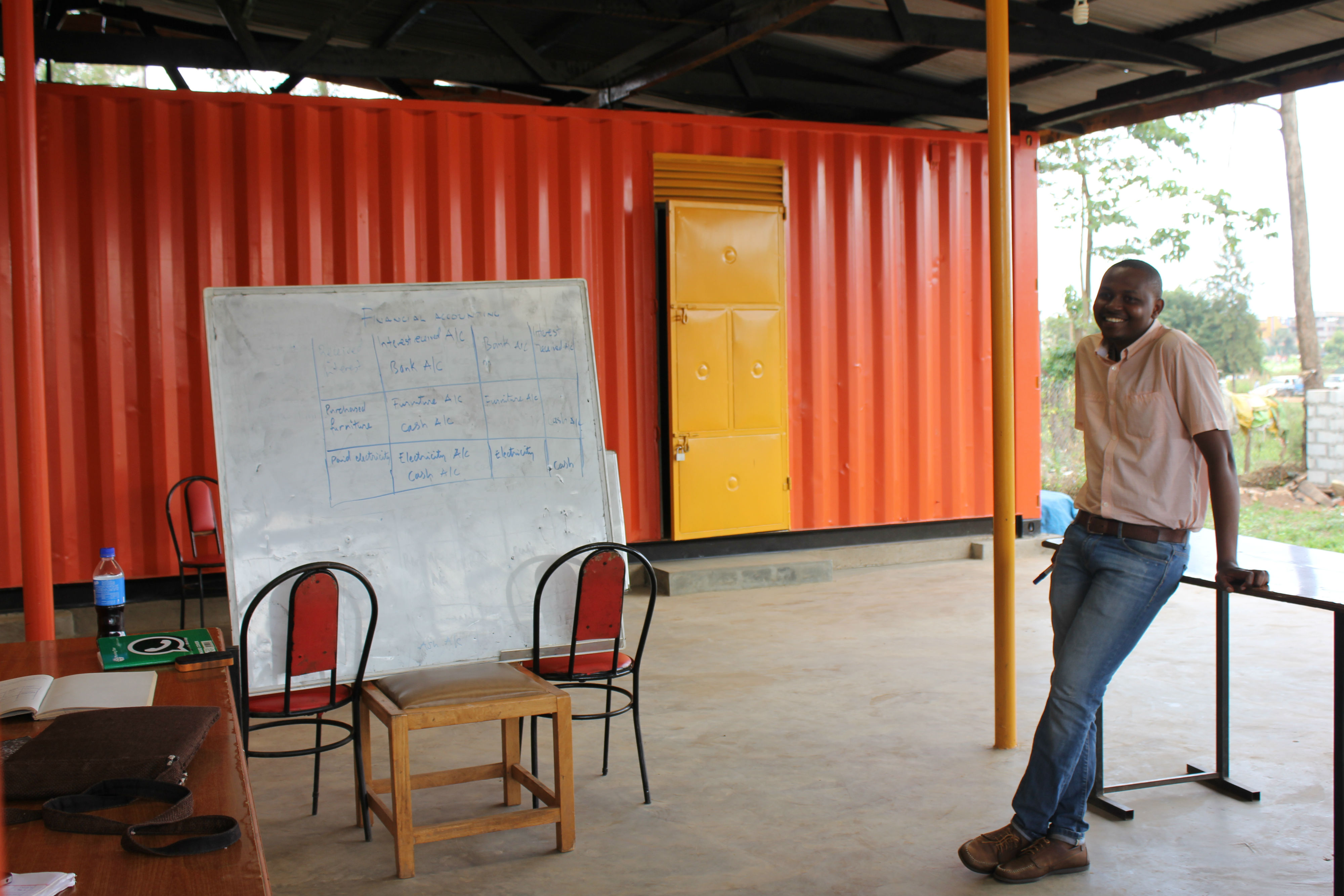 For the past 6 months Fontes Foundation has been lucky to have Serge Iradukunda from Rwanda working for us as part of his FK exchange programme. Before joining the programme, Serge worked as an Administrative and Finance Assistant at Amizero Institute of Technology and Hospitality (AMITH) in Eastern Province of Rwanda. I sat down with Serge last week to talk about his experience of joining the FK exchange programme and working for Fontes Foundation. 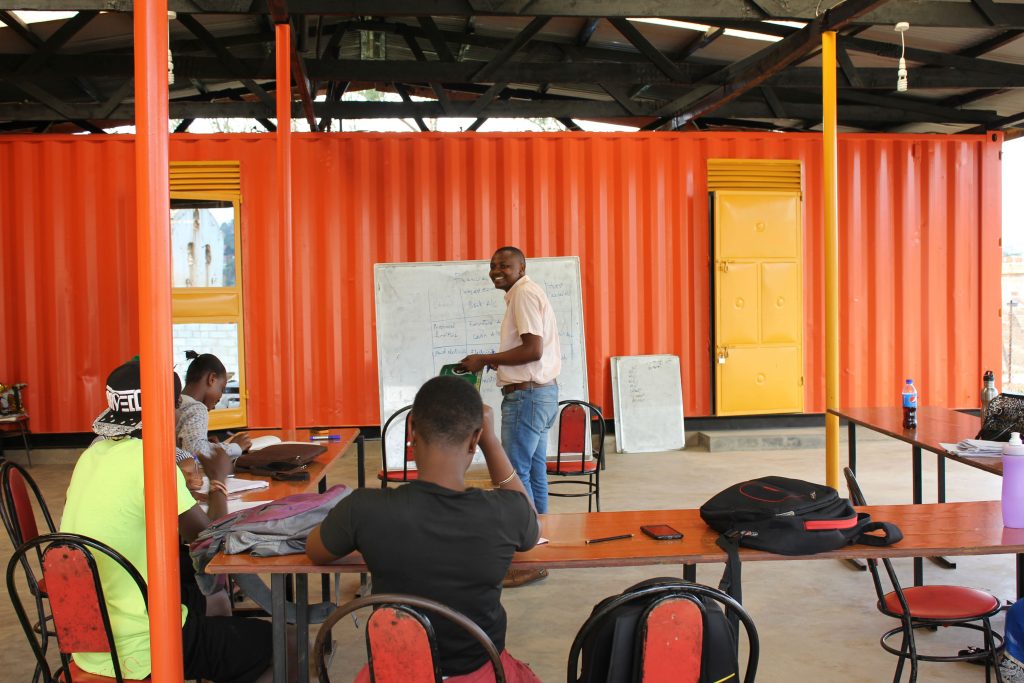 How was it to work for Fontes Foundation?
I really enjoyed working in a friendly and different environment with wonderful colleagues from all over the world. During my period at Fontes Foundation I have been involved in various activities, including organising capacity building workshops and events, planning and coordinating outreach activities in different areas of Kampala, organising Fontes first ever career day, which was a great success, and teaching at Fontes Youth Centre. What I like about Fontes is that the organisation offers personal growth and development opportunities during the programme as well as the chance to learn how to think outside the box.

What is your best memory you have from your time with Fontes Foundation?
I really enjoyed teaching at Fontes Youth Centre in accountancy. The students were great and I liked the way they were interested in the subjects I taught and asking challenging and sometimes funny questions about financial accounting and accounting principles.

What will you take away from your experience?
This 6-month exchange programme has been an experience I will never forget. My time at Fontes has been a learning experience, both personal and professional. It has shaped me as a person and I have gained new skills and knowledge that I would not have had if I had not participated in this programme. Thanks to this programme, I have grown as a person.

Fontes Foundation would like to thank Serge for his contribution to the team, and wish him best of luck in his future endeavours. 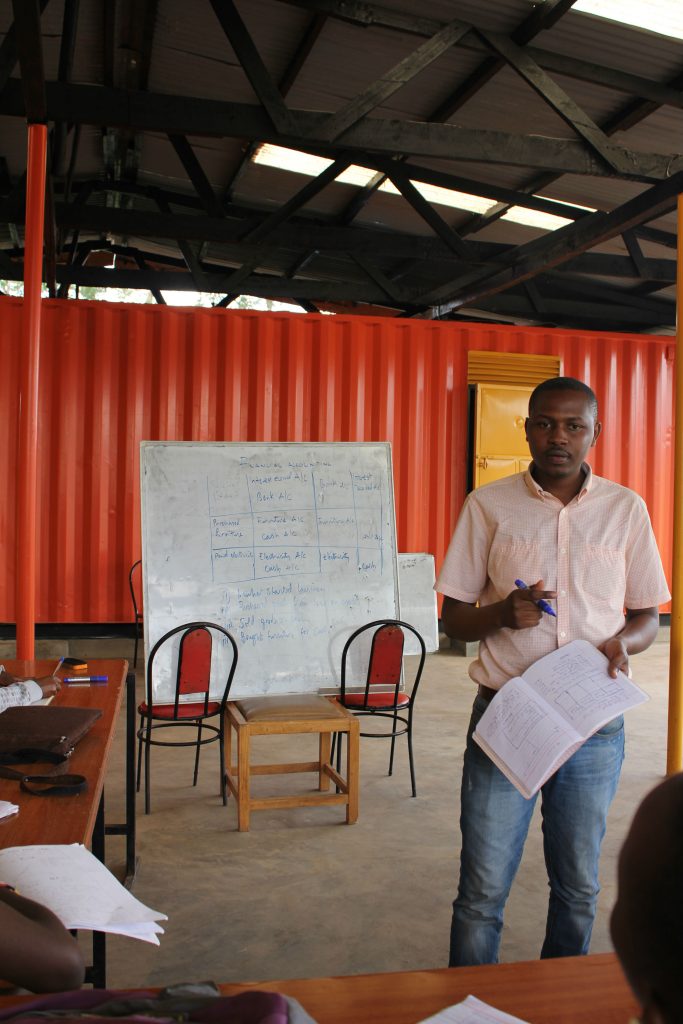 FK Norway is a Norwegian Government agency working to promote international and mutual learning. About 600 participants go on exchange each year through partners in Norway and countries in Asia, Africa and Latin America. 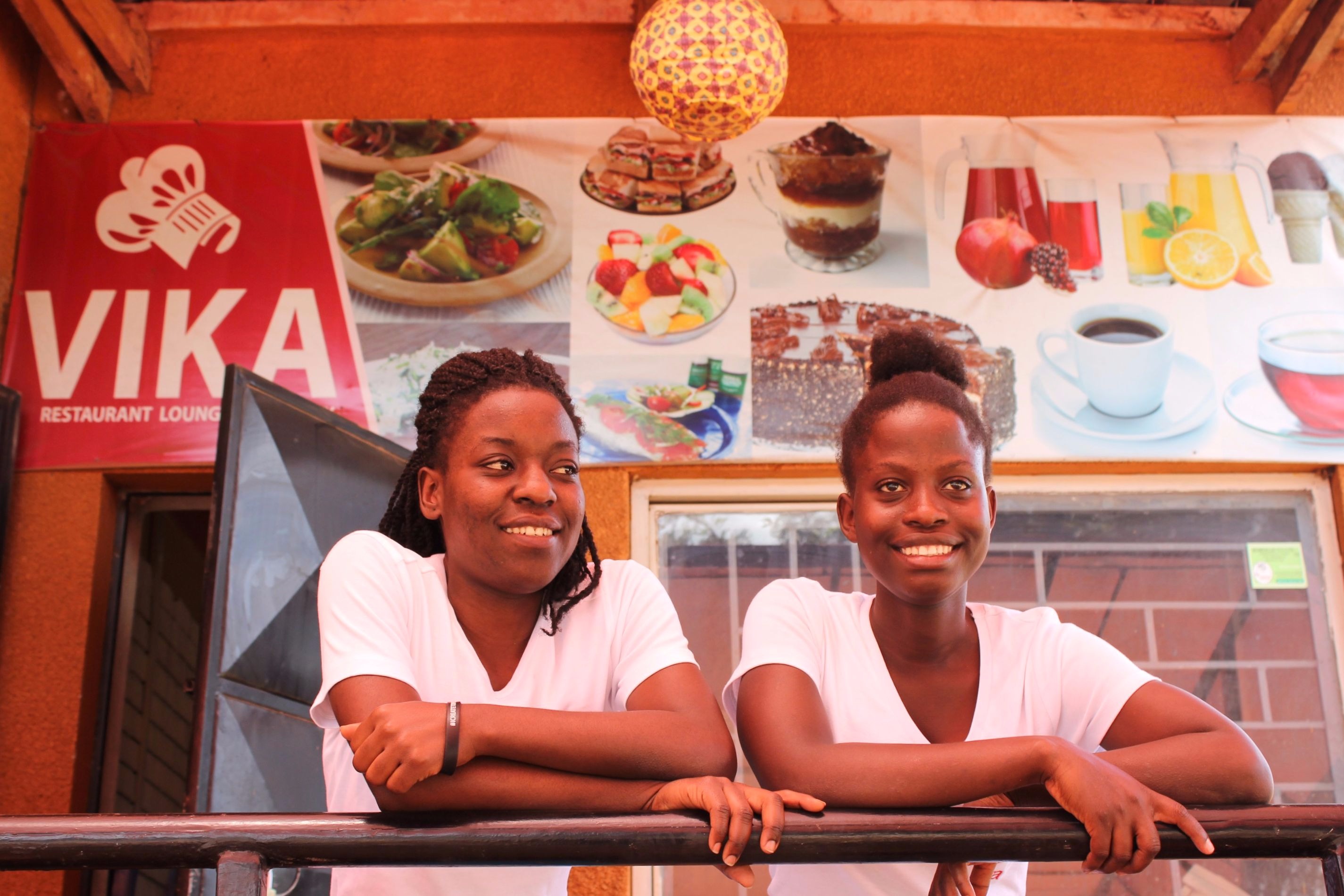 Fontes Foundation aims to support graduates of the Fontes Youth Development Centre in starting their professional careers. We therefore partner with companies across different sectors that are willing to work with Kampala’s youth.The Job Placement Programme (JPP) helps graduates conduct internships at one of our partner companies for three months, where they apply their newly developed skills in a practical setting. After the internships, students will either be taken on full time by their current employers, find a new position or use their expertise to start their own micro-startups.

In order to insure that the JPP functions smoothly, we stay in touch with both employers and employees during and after the internship to assist in the successful implementation of the agreement. Last week, we went to visit Joan Nasaali and Sharon Kemirembe, who both graduated from Fontes Youth Development Centre (FYC) in June 2017 and both recently started working as waitresses at Vika Restaurant in Kampala. They both explained how they are already applying the skills they honed at FYC – especially public speaking skills and improved personal confidence, which they say help them as waitresses. 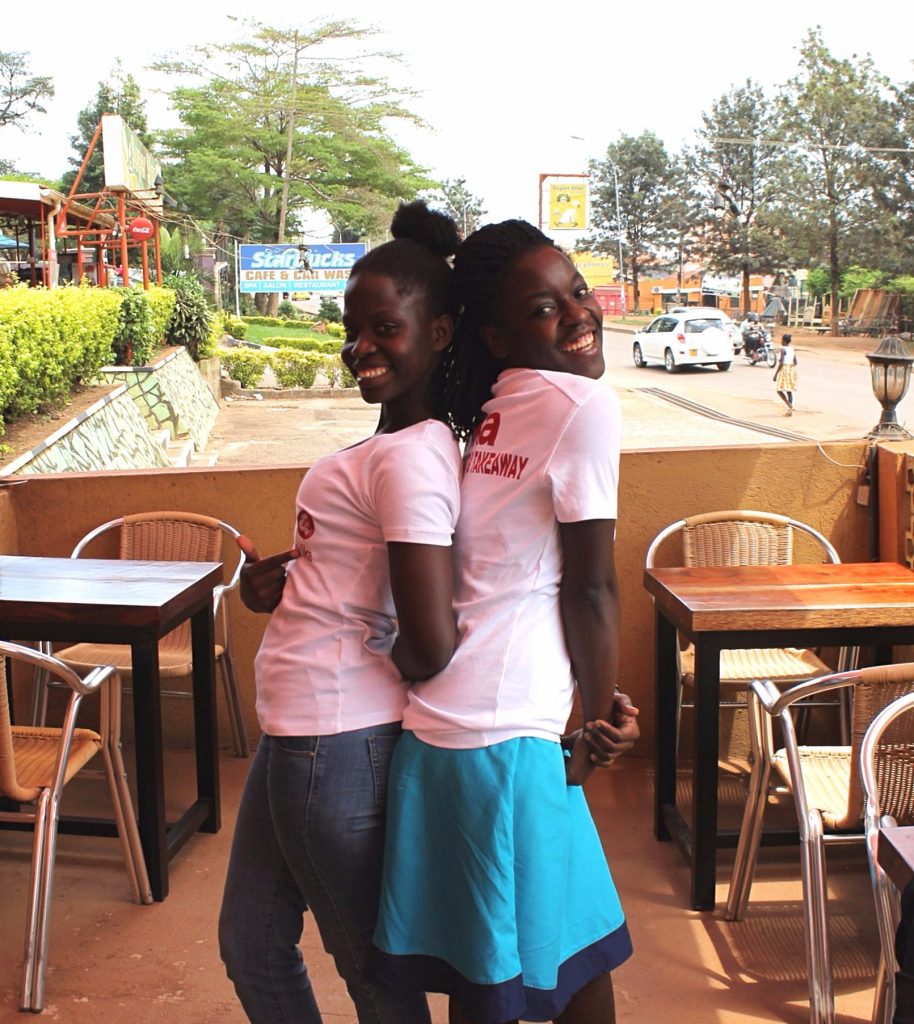 Joan and Sharon at their new workplace

For Sharon, this internship is perfectly in line with her future dreams: to set up her own restaurant. She hopes that the skills she gains during her time as a waitress, in addition to the business skills she acquired during her time at FYC, will help her in progressing to achieve her goal. Joan also plans on setting up her own business, but her passion is in tailoring and fashion, so after gaining work experience using the Fontes JPP, she plans to set up her own business. 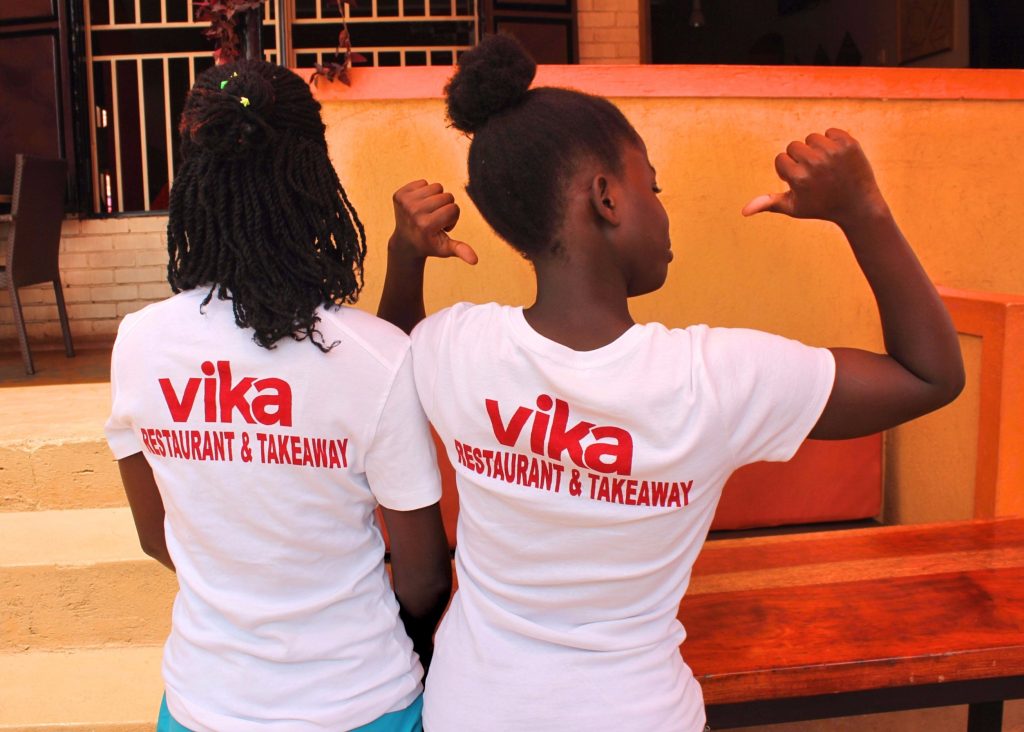 Joan and Sharon showing off their new work uniforms.

Fontes Foundation will continue to follow up with the FYC graduates and their employers to make sure that everyone is happy with the programme. Fontes Foundation typically follows up with students for at least 2 years with continuous mentorship and guidance. Further support is offered by the Alumni Organisation through networking opportunities and business development services. 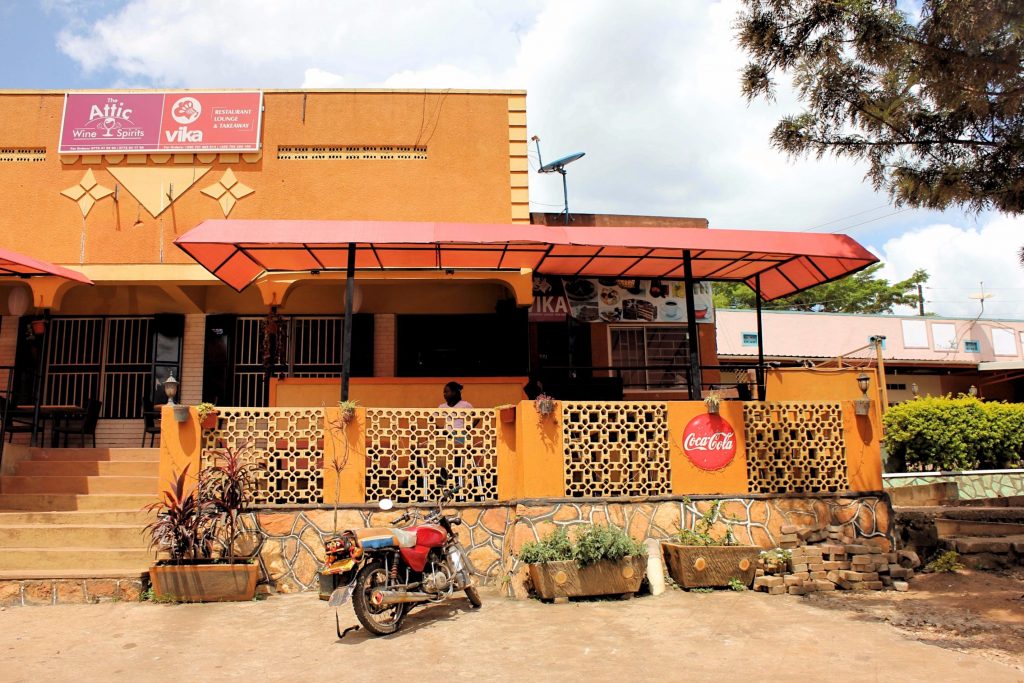 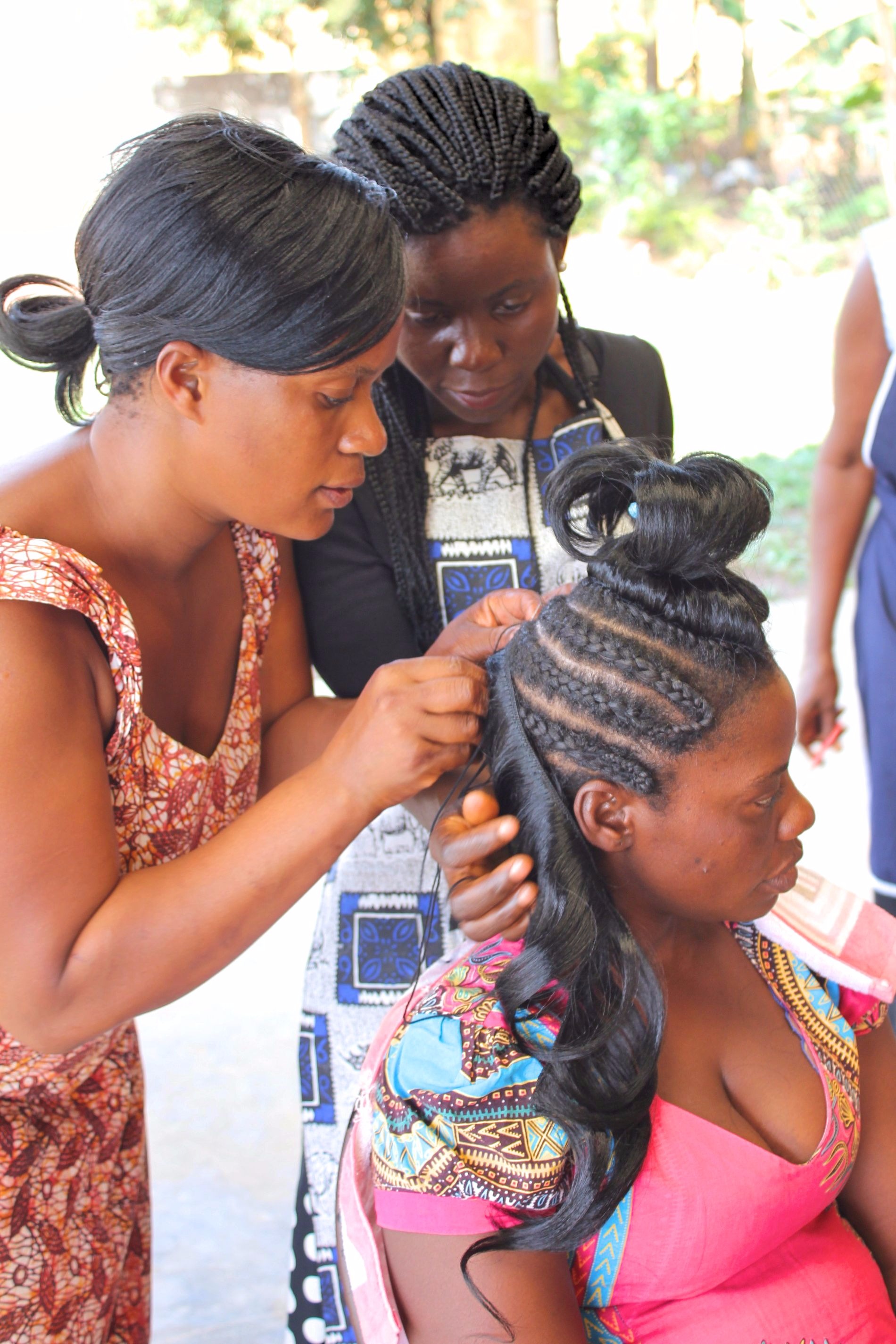 In September, the Fontes Youth Centre’s Single Mothers’ Programme (SMP) students had their end-of-course hairdressing exam. SMP was designed to support single mothers in setting up microbusinesses in hair-dressing, baking, beadwork, soap making and several other different trades with an aim to create an alternative income to sustain the mothers and their children. These microbusinesses would then help them provide for themselves and their families and escape the cycle of poverty.

The Single Mothers’ Programme has trained to date over 100 women. In addition to the training, child minder services are provided for the women to be able to attend the sessions without being interrupted by their children. Over 50 children have come to Fontes Youth Development Centre with their mothers since the program started 4 years ago. The trainings take approximately 12 weeks and are divided into 4 sessions per month, taking place every Monday. 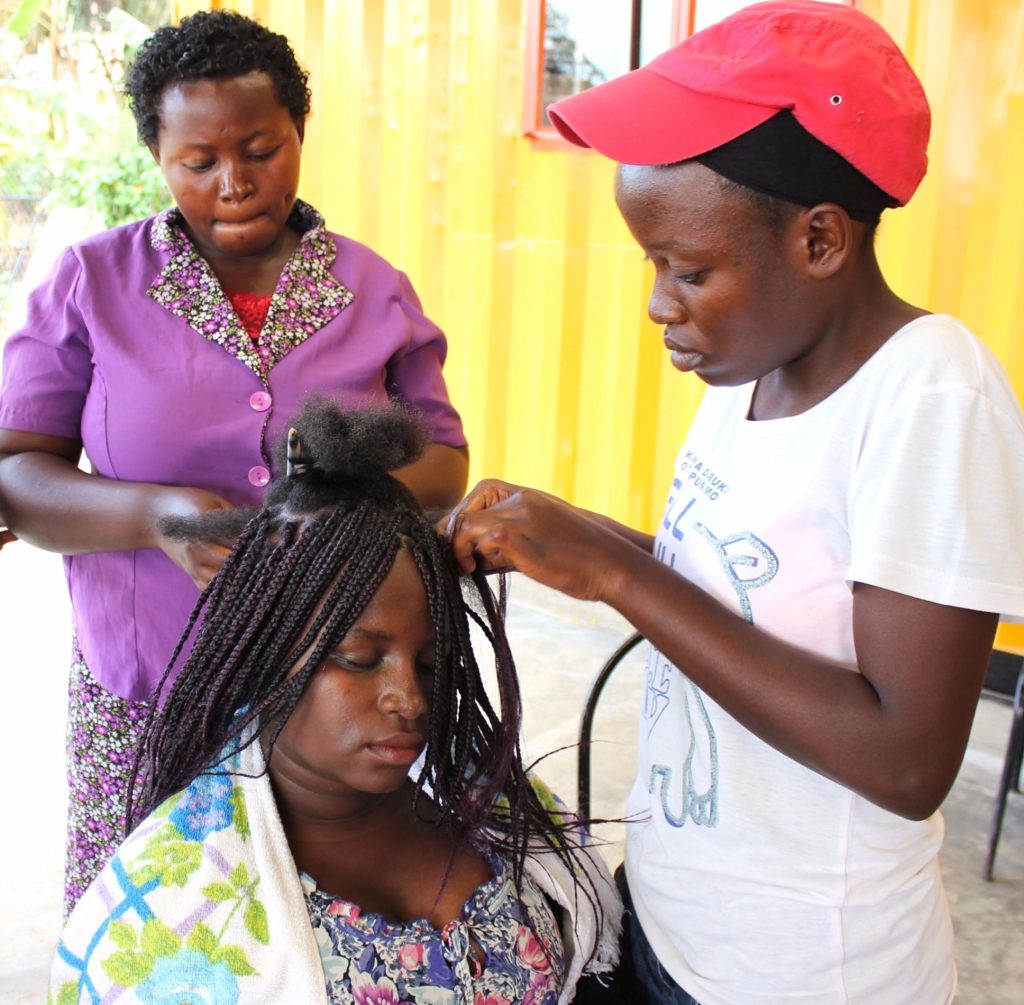 During the last couple of months, the students have been learning different hairdressing techniques with hair and beauty expert Robina Makula of Makula Beauty salon in Kalerwe. On examination day, the students worked in groups to complete a variety of hairstyles, including traditional braids and twists, weaves, chemical treatment and more. The students implemented the complete hairdressing procedure – from taking out the old hairstyle, to washing the hair, drying it, combing it, braiding it and for some models, sewing in a weave. 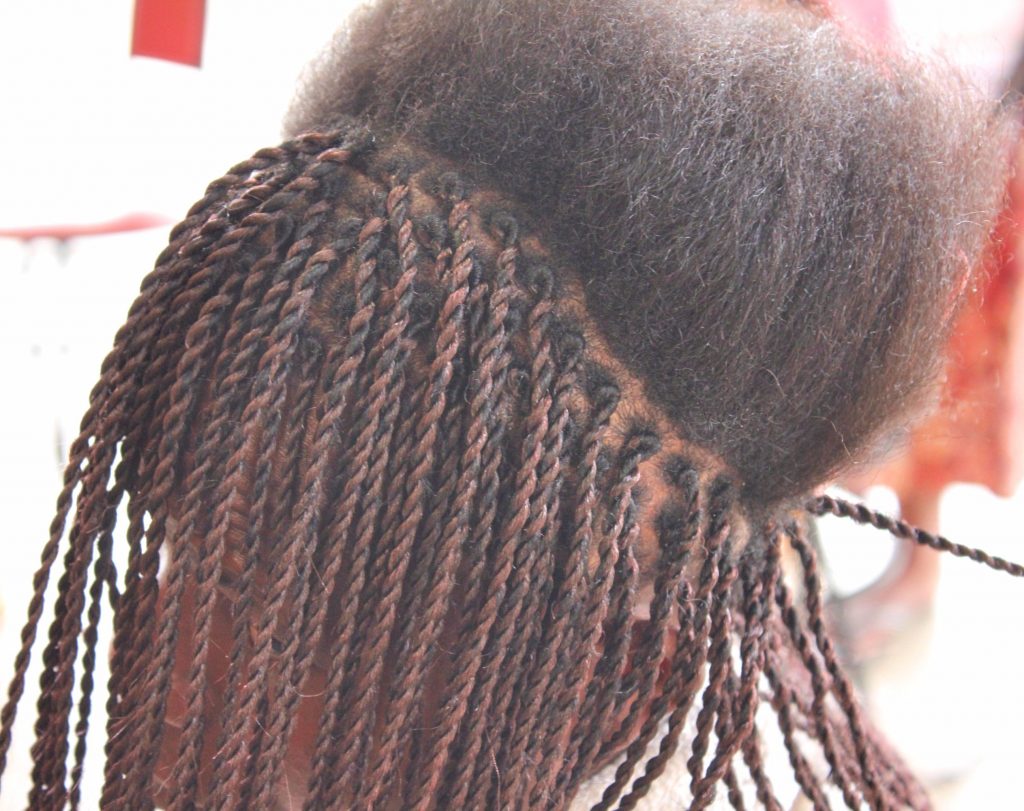 The hairdressing expert and examiner Ms. Makula was thrilled with the results; all of the hairstyles were done to a professional level, and the models were delighted with their new hair-dos! The women will continue to practice and perfect their skills, with many hoping to set up their own hair salons and/or beauty businesses in the future. 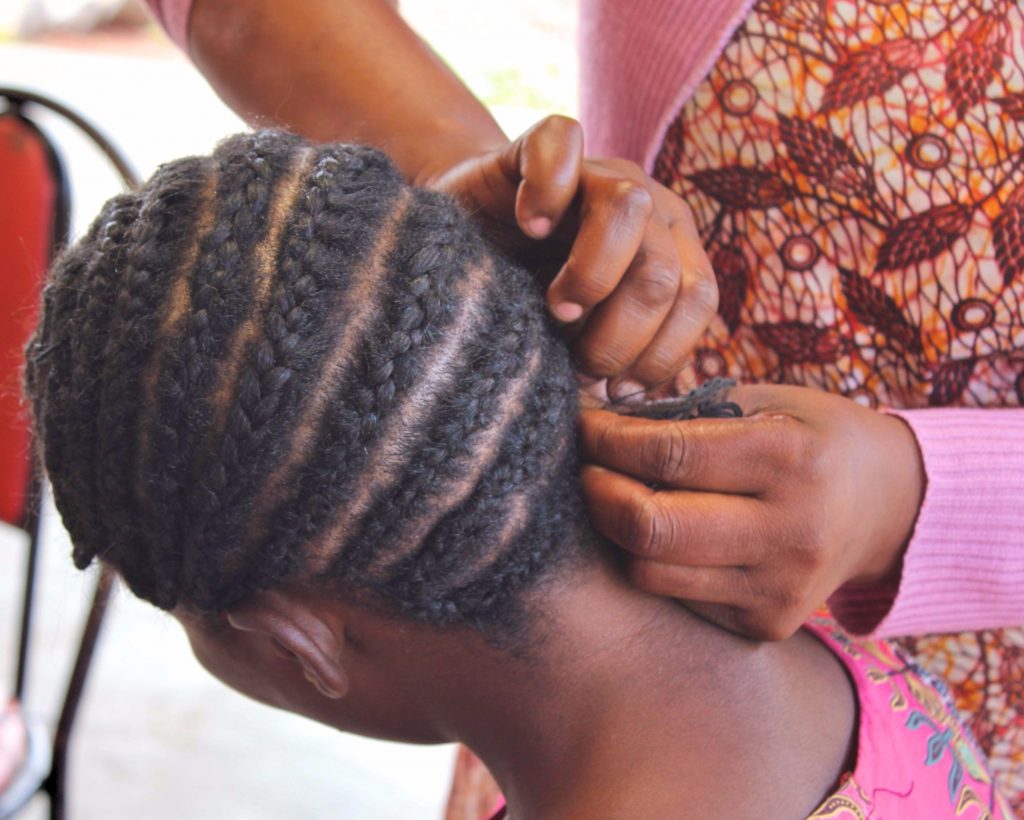 Braiding the hair reading to sew in a weave.

A very big well done to our hardworking SMP students! 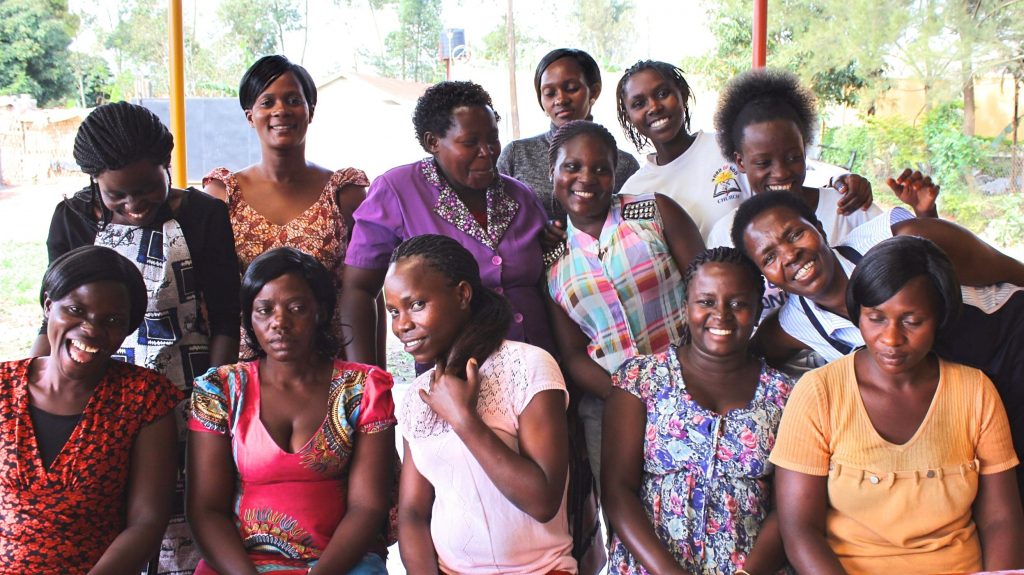 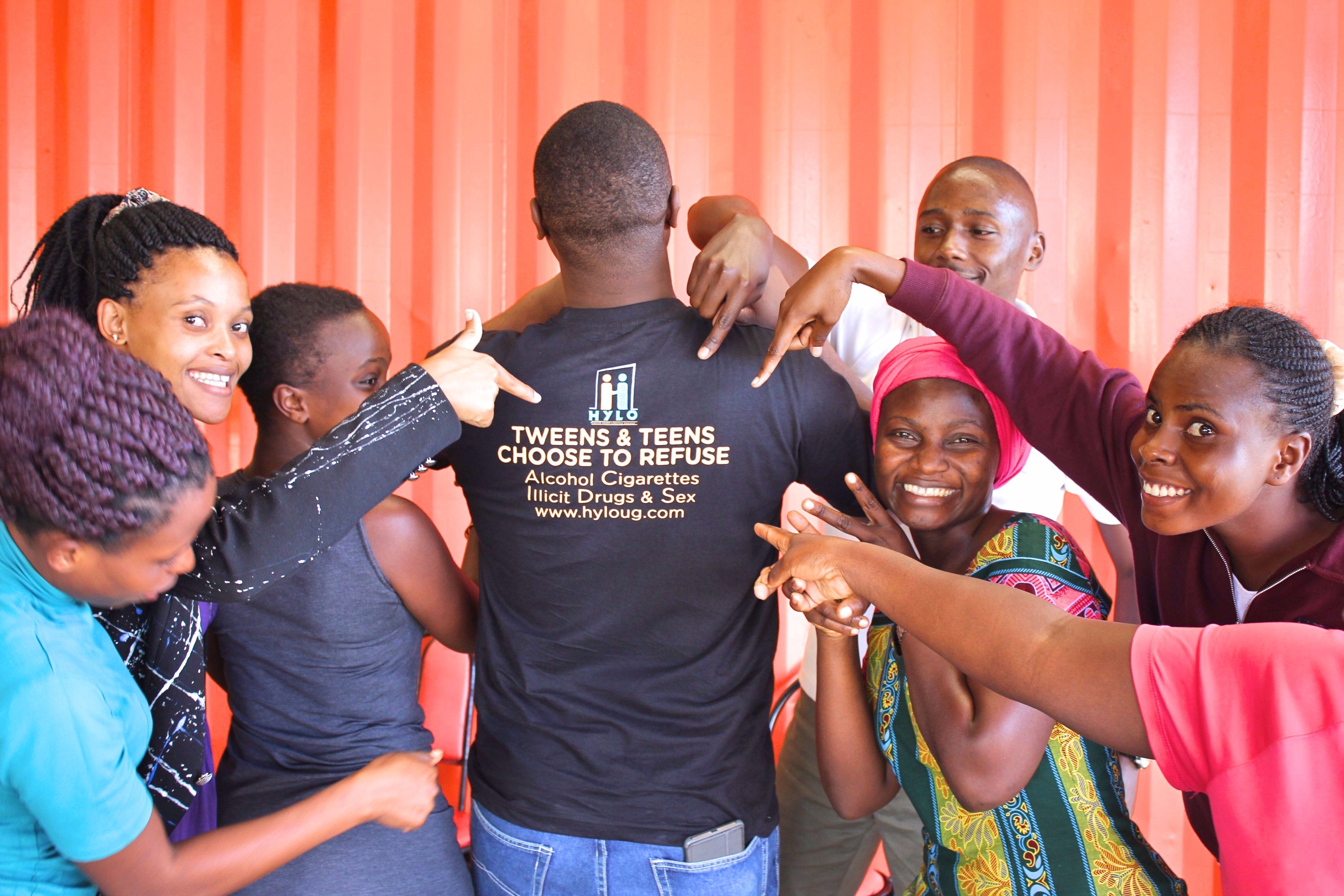 On Friday 22nd September Fontes Foundation welcomed Bill Bekunda – an addiction recovery coach – to the Youth Centre to talk to our Core Course students about addictions and his personal struggle with alcohol addiction. Bill is now a recovering alcoholic and helps people in the process of recovery from substance abuse and alcoholism. 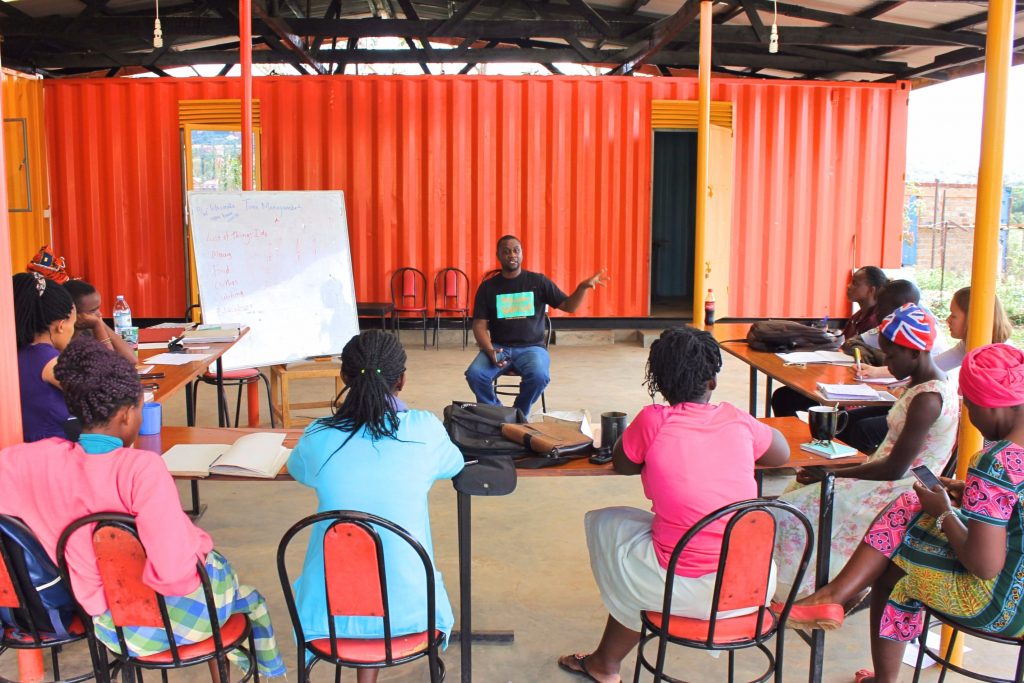 Bill gave a detailed account of his life- and his struggles with alcohol addiction over a period of roughly 16 years (15- 31 years old). He was first introduced to alcohol at the tender age of 14 after giving in to class mates’ peer-pressure.  Bill described the burning effect of the alcohol and how it made him happy and confident, as the alcohol overpowered his senses.

That moment was the beginning of a very long journey for Bill.

Bill explained that alcohol is a depressant and it mimics what dopamine does in the brain. Alcohol triggers the release of dopamine, which should be released naturally through natural pleasures.Once Bill was addicted to the feeling alcohol triggered, he would do anything he could to have more and feel the effects of alcohol again and again.

Through his story, Bill explained the dangers of alcohol, describing how it interrupts thinking capacity and normal bodily functions, effecting reasoning judgement and emotions. Involuntary actions such as the heartbeat, breathing and digestion are all slowed down by alcohol. 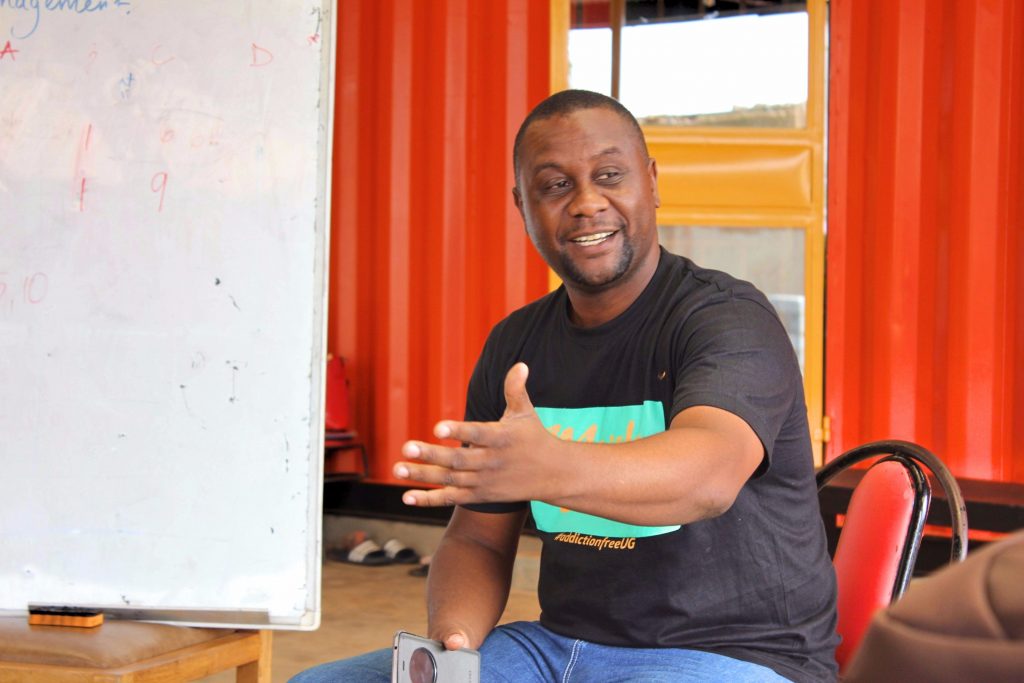 Bell Bekunda referenced statistics by the World Health Organisation (WHO): 10% of the world’s population are likely to get addicted to substances because some people’s brains are structured to like alcohol. 40% of anyone who starts using alcohol under the age of 15 is likely to become an addict, 80% of those who get a problem become drug addicts, and 38% of those people go on to use crack cocaine.

Bill summarised his talk by explaining to the students that it is important to understand the dangers of alcohol and to realise that you never need alcohol. Peer pressure is dangerous not only to children, but to adults too, and alcohol can become a habit and then an addiction. If you ever use alcohol against spiritual, economic, social, physical or mental needs, it can become a danger to your wellbeing.

If you are interested in learning more about Bill Bekunda’s work with addiction recovery in Uganda, or to donate to his on-going work to achieve an #addictionfreeUG, please contact him on: 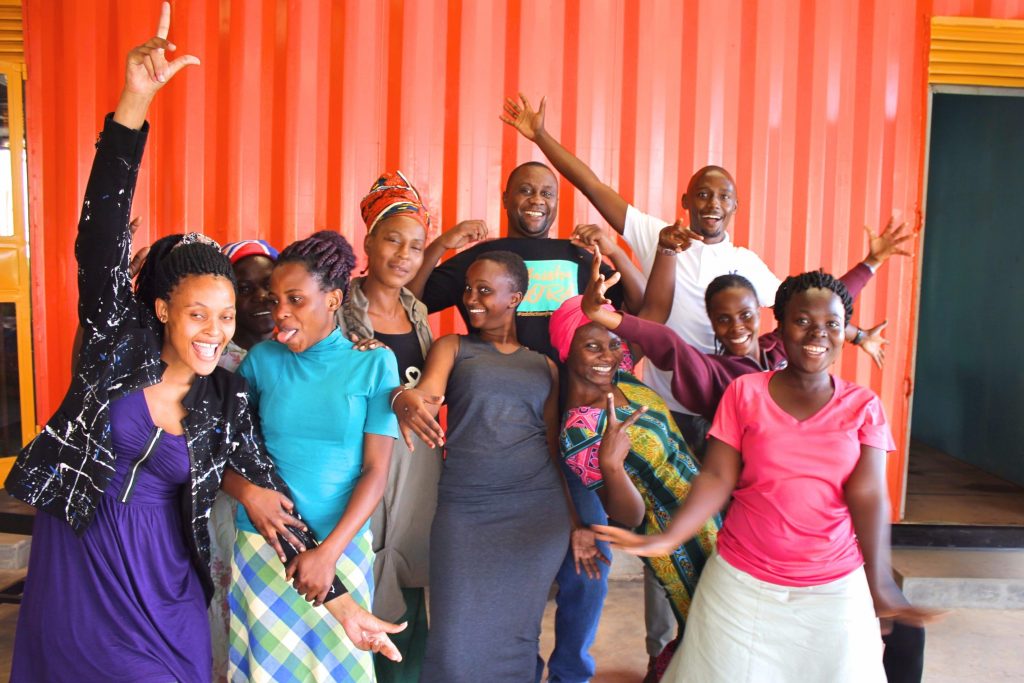 Fontes Youth Centre students and staff with Bill after his talk. 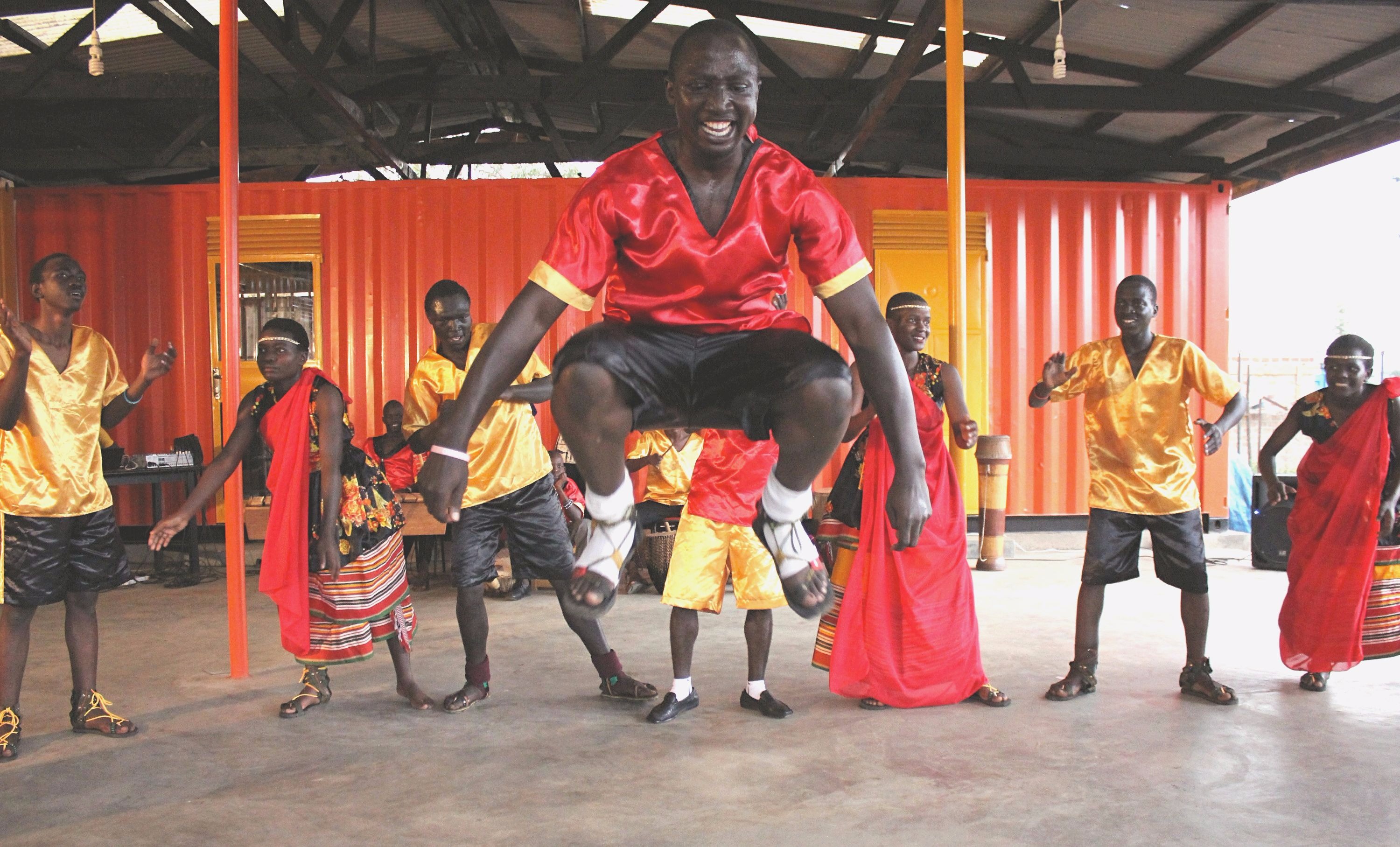 On 24.09.17, Fontes Cultural Troupe performed at the new Youth Centre site located near Ggaba Road in Bunga, Kampala with their event “Explore Uganda’s Cultures.” The event attracted a lot of visitors, all keen to see the variety of dances, singing, acrobatics and fire show that the Cultural Troupe had to offer. 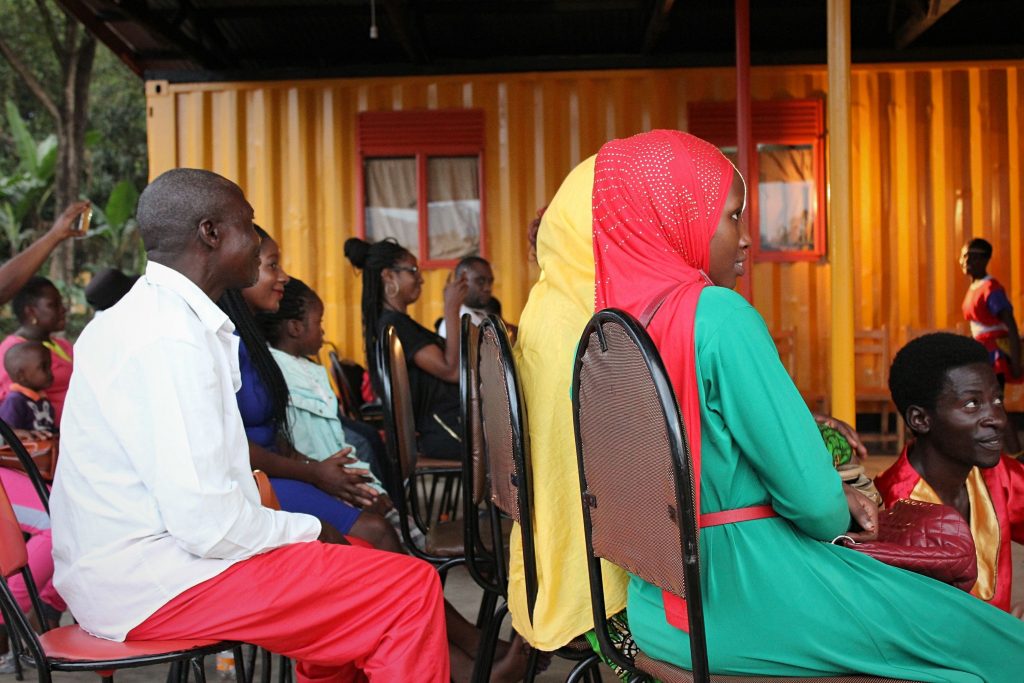 Members of the audience watching the show

Since the launch of Fontes Foundation’s Youth Development Centre in 2012, we have been organising recreational activities open to the entire local community. With the founding of Fontes Cultural Troupe we sought to engage with the local community and learn more about the challenges people face.  Additionally, we aimed to extend our reach and spread the word about the education opportunities we offer. 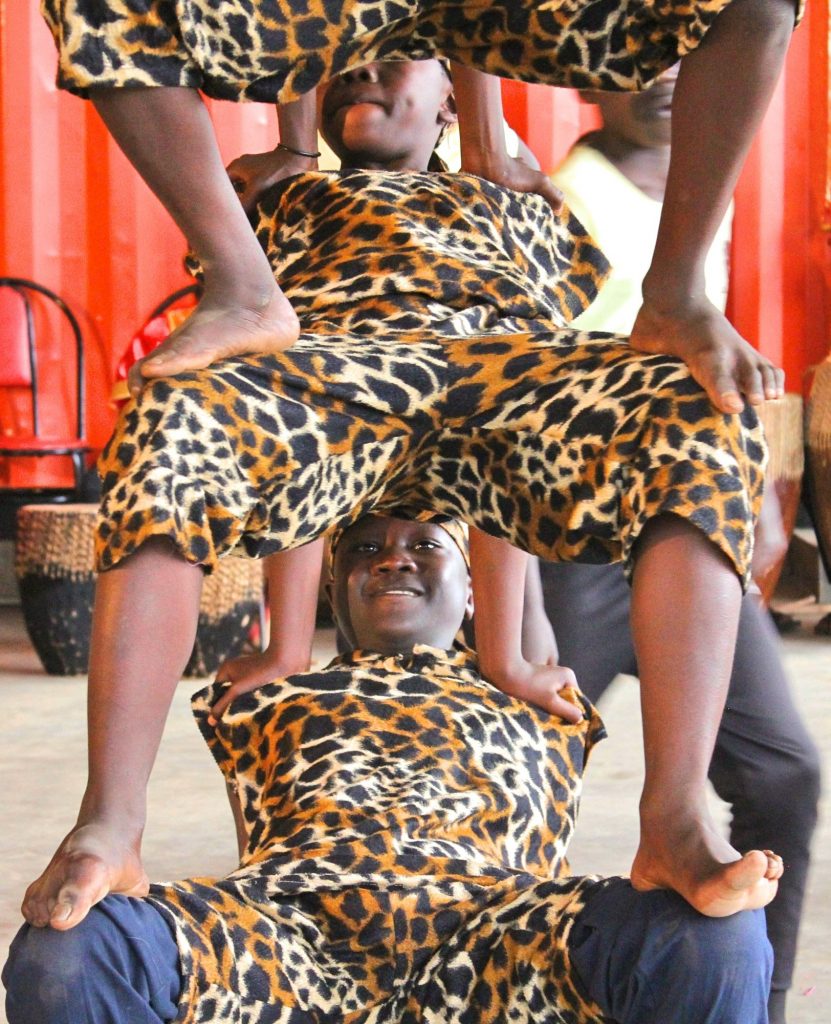 Fontes Cultural Troupe performs modern and traditional dances from many cultures in Uganda, with cultural music, mimes, drama, instrumental music, and fire performance.The Troupe uses a variety of instruments including drums, adungu, xylophone, shakers, panpipes and other percussion instruments and currently has 20+ members, aged between 8 and 35 years old. 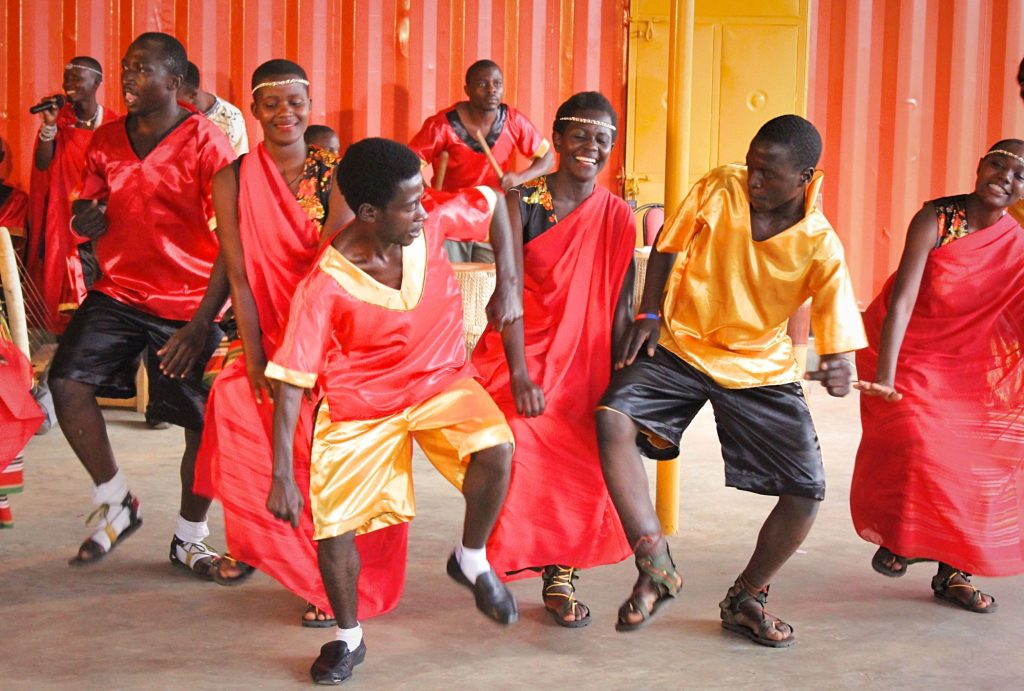 One of the dance performances by Fontes Cultural Troupe

The Troupe activities allow a variety of people to come together and share the beauty of dance and music together.They perform at many events, including weddings, birthday parties, introduction ceremonies, general festivities, and more. 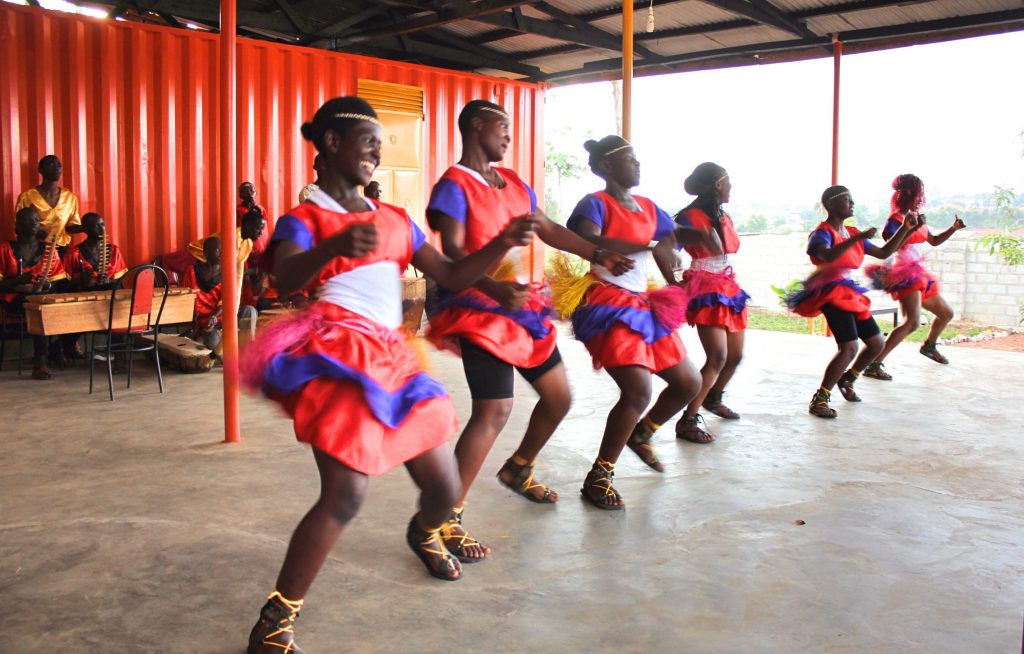 Fontes Cultural Troupe’s “Explore Uganda’s Cultures” event did not disappoint, and left audience members gripped to their seats throughout the performance. The Troupe alternated between dance, song, acrobatics and fire performance to keep the show varied and fun. 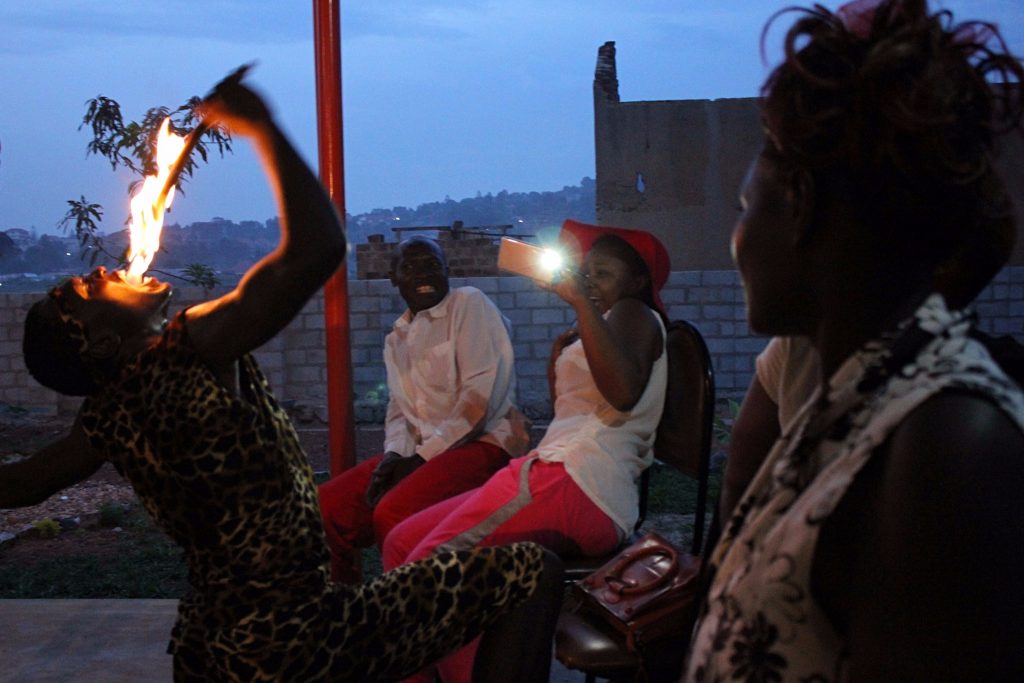 Watching a member of the Troupe eat fire.

A concrete business plan is currently being compiled for Fontes Cultural Troupe to be self-sustainable. With the growing tourism industry in Uganda, it bears the potential of offering additional sources of income to the members. 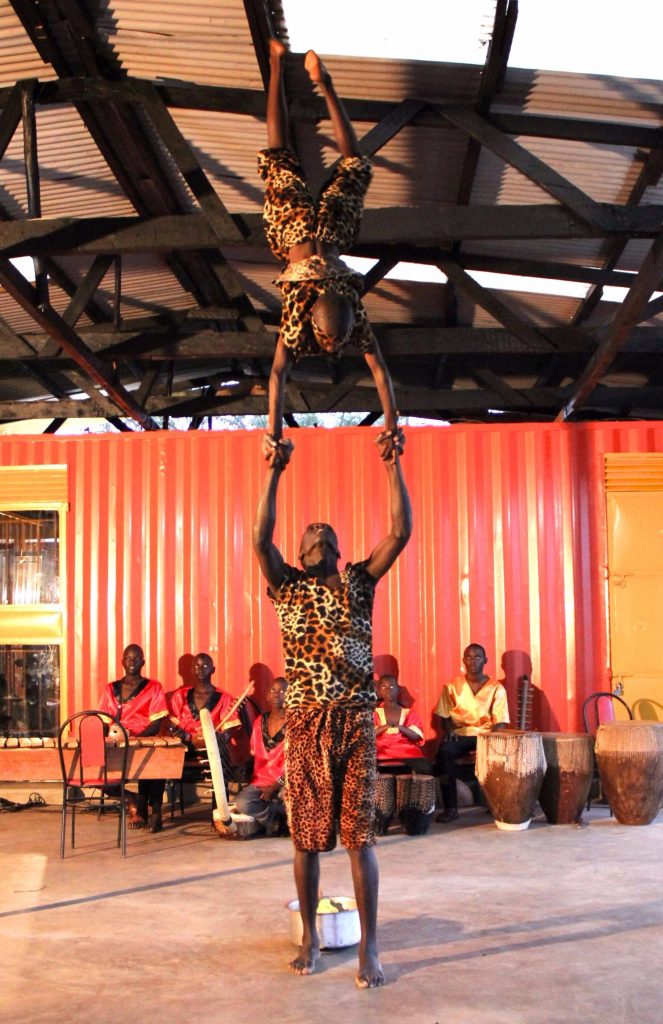 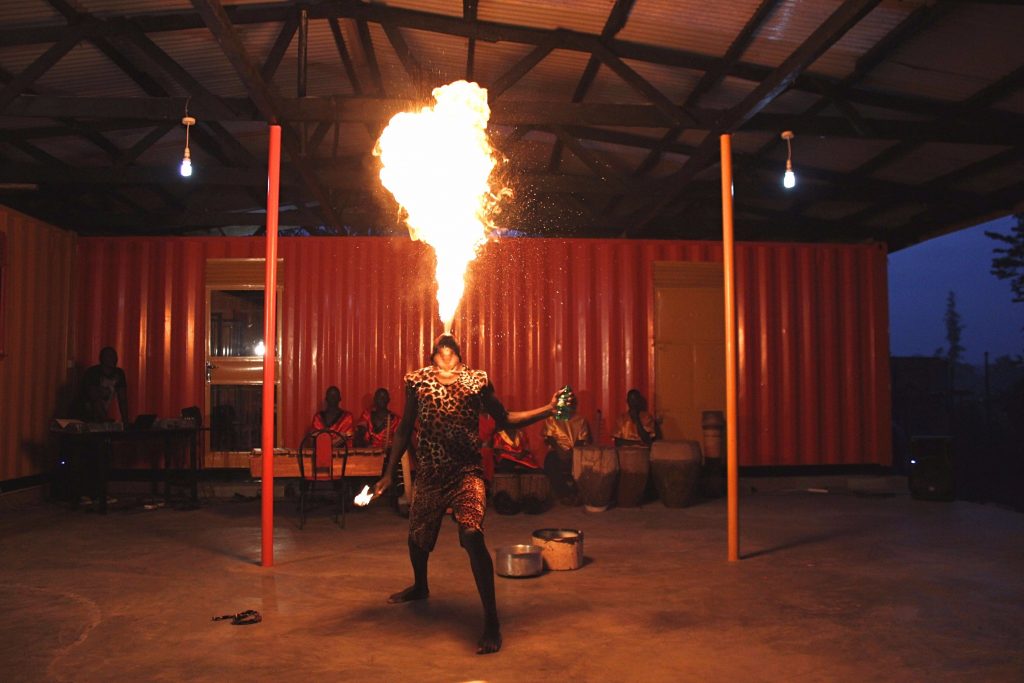 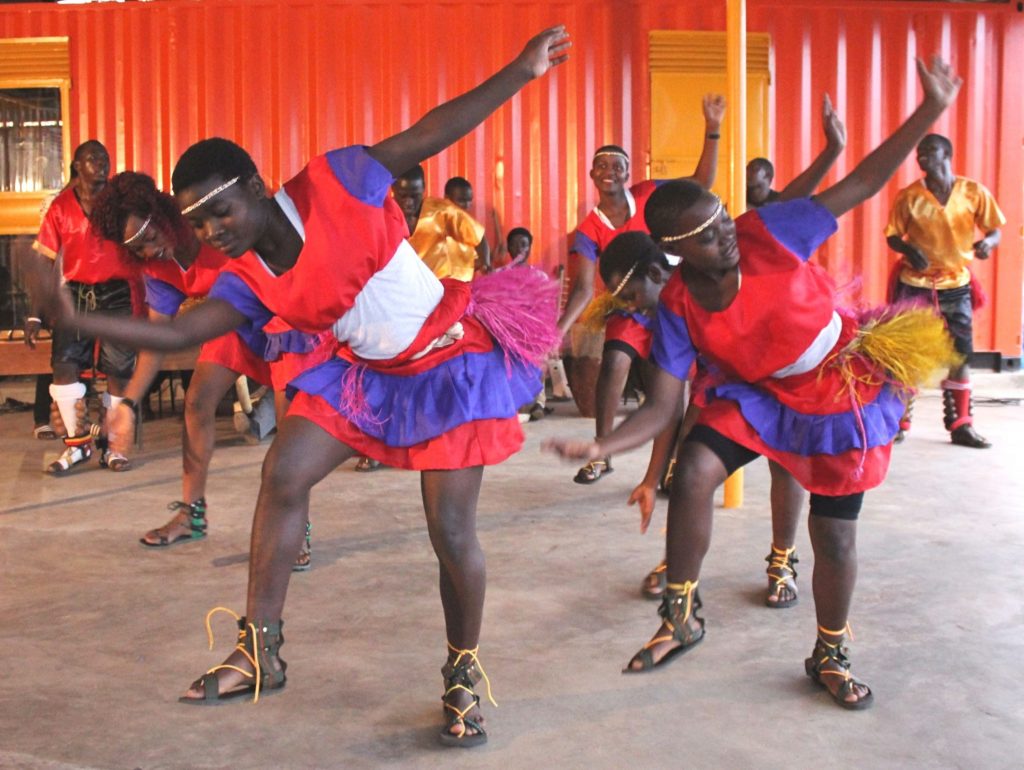