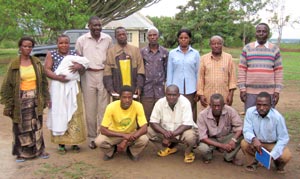 During their visit in March 2006, Marius Koestler and Lucrezia Koestler saw that most of the technical equipment is still in good shape and has been well looked after. At the same time there was a problem of algae in the tanks because of too much sunlight. Also, because the water level in the Kazinga channel has sunk, the water inlet is no longer adequate. The water contains too much sand which destroys the pump. A second important issue is the community; even if the people in Katunguru are eager to help, they do not know how to properly organize themselves. During their visit, Marius and Lucrezia called for a community meeting and a water committee was elected. Their responsibilities are to reach out to the community about the importance of using filtered water, and to collect the contributions. They also have the authority to take decisions and responsibility to solve problems. The water committee is now working well and reports regularly to Oslo. Health has improved considerably in Katunguru since the clean water arrived, especially among the children.
The main problem at the moment is the water in-take in the channel. We decided that the most appropriate solution would be to dig a shallow well (up to 8m deep) close to the channel. With a visit by Lucrezia in July and a second visit by Marius in September 2006, this will hopefully be completed within a few months.