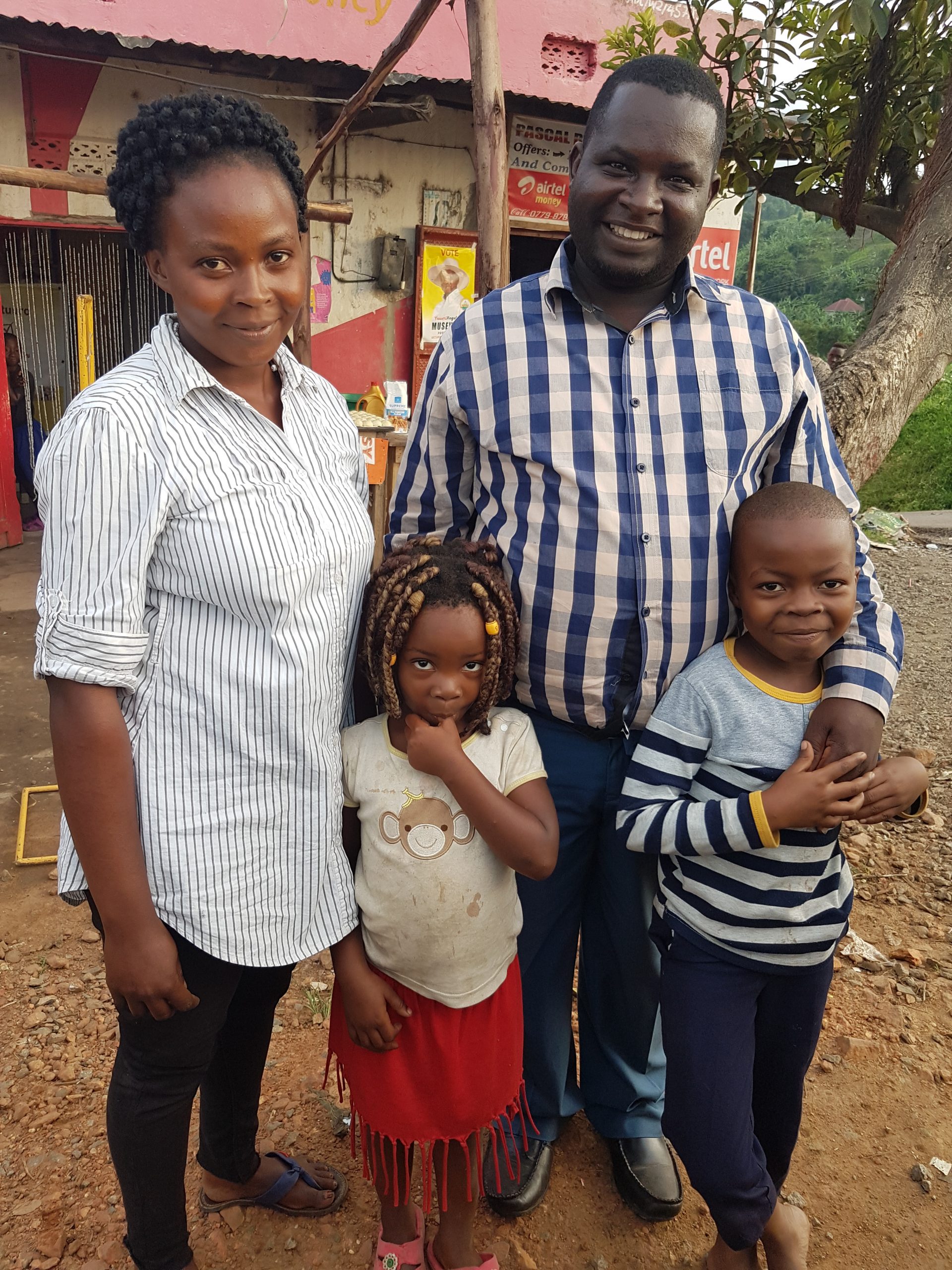 When we started with the water projects in 2004, Pascal (see title picture, together with his family) was only a little 12 year old boy. He grew up as an orphan, having lost his parents when he was very young. He was a social outcast since because of his extreme shyness people thought that he could not speak. However, the development this boy has gone through since then is truly astounding. When we started installing the first water equipment, Pascal was always there, being interested in how things work and helping out by doing errands for us. Also, Pascal quickly proved to be technically adept. We realized that Pascal was very gifted and had an unmatched eagerness to learn. As the Fontes scholarship program came about, Pascal became our first supported student. After having completed secondary school in 2009, he started volunteering as a community liaison officer at a lodge in Queen Elizabeth National Park where all the villages with Fontes water projects are situated. Proving himself on the job, he got promoted to the position of supervisor. Around the same time, Pascal began to realize that the people that grow coffee locally are losing out on a lot of money. He observed that they sell all the coffee they produce and still buy industrial coffee for their own consumption instead of using their home-grown coffee. They did this because they thought that that way, they can make more money, but actually the opposite is true. So, Pascal taught the community to start using their own coffee for their own consumption instead of selling everything since that way they can increase their profit. Also, Pascal used this realization to grow coffee himself in his garden and to sell only the excess coffee on the market to make money. Nowadays, his wife is taking care of the coffee business. With the profits from producing coffee, in 2013, Pascal financed his degree in governmental studies. After having completed his degree in 2014, Pascal became the Fontes Assistant Field Officer, helping our then Field Officer in overseeing all the water projects and supporting them on technical issues. After only 8 months, Pascal has been promoted to be our Fontes Field Officer, a position he has now held for 6 years to our greatest satisfaction. Furthermore, Pascal is married and has two children. Being a long-term thinker, Pascal bought some land many years ago on which he just finished building a house for his family. We are so proud of the person Pascal has become and we are especially thankful to the support he has given to the water project communities.

While Pascal continues to impress us, Cleophas’ story is in no way less remarkable. Just like Pascal, he was a Fontes scholarship student. He finished secondary school in 2013. Being very fascinated in technical issues, Cleophas pursued a certificate in electrical installation at YMC Wadegewa (Young Men’s Christian Association). After having heard of the Fontes Youth Centre, Cleophas readily made the decision to come to Kampala to attend the business administration course in 2016. He told us that his time in the Youth Centre was the most impactful to him, because there he learned how to think like an entrepreneur and start a business with little resources. At the end the course in the Youth Centre, as a capstone project, students are required to come up with and present a business plan. We were truly excited to hear that Cleophas executed his business plan of selling Umqombothi, a local brew, right after finishing the course. His business is still continuing to this day but it is now his sister that is handling the everyday operation of the business. With the profits he made, he started another business and bought solar panels and batteries to charge phones for customers. Currently, next to being a business-owner, he also serves as Fontes Assistant Field Officer, shadowing Pascal. The village of Katunguru Rubirizi, Cleophas is overseeing and assisting by himself and when we attended the meeting with the local water committee, we were deeply impressed to see how professionally he chaired the meeting and how well his presenting skills have developed. Cleophas recently got married and has a child. Pascal lets him live at his house while Cleophas saves for an accommodation with his wife. Also, Pascal supported Cleophas with his wedding. In regards to Cleophas future plans, he told us, his grand vision is to have a big bar for the community to come together and share a drink.