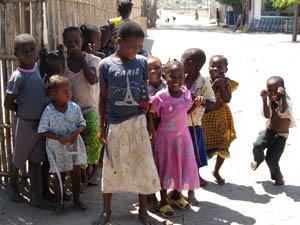 In November 2009 the second implementation phase started in Quissanga, where Fontes Foundation installed a water supply scheme funded by the Norwegian oil company Statoil in early 2009. The second implementation phase will first include the construction of four permanent public tap stands, and later the rehabilitation of the colonial water tower that will make it possible to distribute water to the administrative buildings and the population located around them. The construction of all structures is done by a group of artisans from Quissanga district, who registered in a group called “Association of the United Brothers of Quissanga” (Associação Irmãos Unidos de Quissanga), supervised by Fontes Foundation local staff and local government officials.

Water Supply for Kashaka by fontes